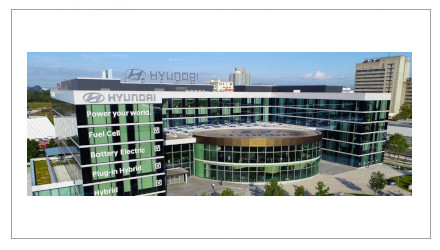 In addition, Hyundai Mobis Co. and Hyundai Wia also become members of Climate Group’s RE100. All four affiliates join more than 350 other global firms in the initiative, with plans to accelerate efforts on the use of 100 percent renewable electricity throughout its global operations.

While all four companies aim to transition to 100 percent renewable energy by 2050, each will make independent efforts to achieve targets ahead of schedule, by as early as 2040, depending on energy supply and demand conditions at their respective overseas operations.

Under the goal of carbon neutrality, the four companies plan to establish a joint RE100 response system at global sites where they commonly operate. The Group is considering various ways to procure renewable energy, such as self-production through solar panels, power purchase agreements (PPA) with wind and solar energy producers, as well as purchase through Korea Electric Power Corporation’s (KEPCO) ‘Green Premium’ program.

The Group plans to successfully achieve its carbon neutrality goal by various ways as well as RE100 initiatives. The Group will build an eco-friendly smart factory for efficient production, acceleration of vehicle electrification, and support carbon neutrality in its global supply chain.

RE100 is a global initiative led by the Climate Group and CDP, bringing together the world’s most influential businesses committed to 100 percent renewable electricity, and has been campaigning since 2014. To be a member, a company must have a significant power footprint (i.e., 100 GWh annually) and are required to submit mid- to long-term renewable energy power securing plans within a year after joining. Over 350 global companies are members of RE100.